Tweeter Pan
A tobacco company exec invents a childlike persona on the social networking site Twitter, becoming a cult hero among 12-year-olds as he battles to take down the evil company he works for.
Writer: Bobby Alvarez

Jerk Store
Three unemployed friends open a “jerk store” where they sell men with bad attitudes.
Based on the Maxim article.

Wasabi Wayne
After eating magic wasabi at a local sushi restaurant, a mild-mannered father of three is transformed into a Japanese superhero.
Writer: Jack Luragi

Aspiring screenwriter’s tweets as hackneyed as his scripts

Scribe’s last follower finally gives up on him 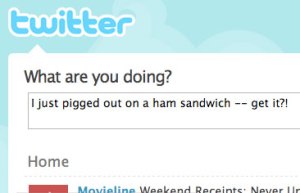 For nearly six months, aspiring screenwriter Jackson Bell has been bringing the same lack of wit and originality to twitter that he does to his comedy screenplays – and his followers have taken notice.

“They’ve been dropping like flies,” said Bell, confused. “I don’t get it. My tweets are always hilarious. Maybe it’s some kind of technical glitch on the twitter server.”

Bell’s last follower, his mom Lucy Smith, finally decided to stop receiving his tweets after Jackson posted a pointless, humorless message about his lunch on Sunday.

“It’s just pathetic,” said Smith. “The embarrassing thing is that he contacted all my friends and asked them to follow him, too. So of course they all signed up, only to learn my son is a moron. Apparently, I raised a boy who thinks fart jokes are still funny. No wonder he’s a total screenwriting failure.”

Bell is currently trying to come up with a funny way to explain his feelings in 140 characters or less.

You’ve Got Twitter
Sequel to the 1998 film You’ve Got Mail, only this time the main characters never even meet each other because they’re too busy tweeting to actually engage in normal human behavior.
Writer: Alex Litel

Brotox
An aging movie star convinces his identical twin brother to get the exact same plastic surgery as him so nobody will know he’s gone under the knife.
Based on a pitch by Chuck Norris.

The Rug That Smelled
Plot being kept under wraps.
Writer: Akiva Goldsman